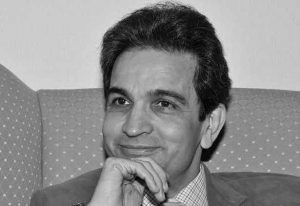 He completed his medical graduation in India and was awarded the qualification of M.B; B.S with a Gold Medal. Mr. Vadodaria achieved his Masters degree in General Surgery (M.S) and Plastic Surgery (M.Ch) following 6 years of training in these respective specialties. He was also awarded a prize during his training for the best paper presentation by the National Association of All India Plastic Surgeons and was also awarded an International Travelling Fellowship and J.N.Tata Scholarship for advanced training in Sweden.

He also had advanced cosmetic surgery training in Sweden, Germany and Belgium. Mr. Vadodaria has presented more than 100 papers in national and international plastic surgical congresses. He has been innovate in designing new instruments, simulators and advanced plastic surgical techniques, many of which have been published in industry reviewed plastic surgery journals. He is invited regularly to speak and train at International Plastic Surgery Meetings in Sweden, Germany and Spain.

While Mr. Vadodaria’s qualifications and training attest to his knowledge, it is his surgical skill and his dedication to excellence and commitment to personalised, quality care that is the basis of his greatest recognition.

Mr. Vadodaria has worked as a Consultant Plastic Surgeon at the St. George’s NHS Hospital, London and as an Honorary Lecturer in the division of Surgery at the Sheffield University. During that time he was involved in teaching the medical students and training the plastic surgery trainees. Mr. Vadodaria left the National Health Service in 2007 and established his own private practice in order to focus on his interest in Cosmetic Surgery.

He has specialised in body contouring procedures such as breast augmentation, breast reduction, breast lift, abdominal reduction, liposuction and the correction of male breast enlargement. Alongside those procedures and techniques he also specialises in facial plastic surgeries – face lift, eyelid and eye brow surgery, nose and ear correction.

Mr. Vadodaria is particularly noted for achieving a very natural appearance for his patients. In addition, by establishing a strong doctor – patient relationship with open channels of communication, Mr. Vadodaria feels he is able to fully appreciate a patient’s goals and motivations, which are so critical to tailoring an appropriate treatment plan. In light of constantly evolving techniques, sophisticated new technology and exciting developments, Mr. Vadodaria regularly attends national and international conferences, where he participates in workshop with colleagues and other specialists in the field.

He recently appeared in the TV serial entitled ‘Embarrassing bodies’ in Channel 4 where he demonstrated the surgical procedure for correction of male breast. Mr. Vadodaria has also been invited to be interviewed on radio shows and specialises in providing well rounded information to the general public regarding liposuction procedures. Mr. Vadodaria was also to demonstrate liposuction surgery for an educational documentary produced by the international media agency – Reuters.

View our other websites

*Cosmetic surgery results can vary from patient to patient and there is no guarantee of specific results. The images shown have not been altered. All images, videos and testimonials are based on the personal experiences of the patients and represent individual body shapes and results.